From Hardship to Hope is a series of stories about our program graduates told through their eyes. From childhood to now, we will learn about their journeys and try and understand the impact Uplift has had on their lives. This story is about Linda Smith, a 2019 graduate who has already received multiple promotions in the professional world and is now a Business Analyst for PECO. This is her journey:

Linda grew up in Mississippi where she lived with her father, stepmother, and three sisters. She was close with her sisters and got along with her stepmother, but did not have a great relationship with her father. Linda’s parents got divorced while her mother was pregnant with her, and her father did not let her, or her sisters, see or have any type of contact with her mother. After a short while, her dad and stepmom got a divorce as well, and her father left to live his own life without any contact. She and her sisters ended up moving in with their grandmother for the next several years, and Linda remarked that those were the best years of her childhood. 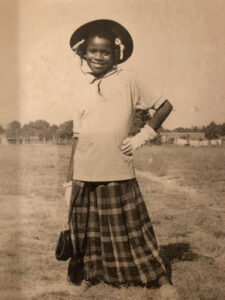 After living with her grandmother, Linda moved to Tennessee with her aunt so she could attend Tennessee State College. She always enjoyed school and had a lot of friends growing up. With home being an extremely difficult place for her, she noted that “school was always a solid place for me.” Linda enjoyed living with her aunt, especially because there was only an eight-year difference between them. She felt more like a big sister than anything else, and she was able to be a stable presence for Linda.

During her first year of college, Linda ended up meeting her birth mother. Her sister had made a point to find her, and after much convincing, she got Linda to join her on a trip to Michigan. She did not know what to expect from this meeting and was very emotionally confused by the idea. It turned out to be an extremely challenging time for Linda. She struggled in meeting this woman because, as Linda put it, “she gave birth to me but, but she was not my mother.” It turned out to be a short trip, but that did not minimize the impact it had. This was yet another piece of her life that contributed to her lack of a stable family dynamic.

Linda spent most of her college career trying to find a family-like situation, and this is part of the reason she never graduated. She wanted to build something for her future children which she never had: a normal life. This pushed Linda to go out and try to meet a boyfriend, and she found her first one in college. Sadly, it was not a healthy relationship, but an abusive one. While extremely difficult for her, Linda noted that she “learned a lot through it,” and she was able to better evaluate her relationships in the future. It turned out that her next boyfriend, a Philadelphia native, would become her husband. Prior to graduating she moved to Philadelphia to be with him and carry out her goal of starting a family. Together, Linda and her husband had a son and a daughter, but sadly got divorced a few years later. This was not easy for Linda or her family, especially because Linda’s main goal was for her children to have a stable life.

Around the time of her divorce, Linda’s youngest sister was battling cancer, and this came with a large amount of medical expenses. Linda did her best to help her sister, but the combination of supporting her and her children became extremely difficult financially. So, she started stealing from her job to help pay for her children’s expenses and sister’s medical bills. While most of this money went toward helping others, Linda noted that she did help herself with this money as well. This process went on for a long time before she was caught, and throughout all of it she managed to keep her actions a secret from her family. “I was the only one who knew about this other side of me” said Linda, referring to the part of her that did these terrible things. After being caught, the hardest part of the sentencing process for her was watching her family and friends discover this part of her life. She said, “It broke my heart.” While she committed these crimes with good intentions, Linda realized that no matter the circumstances she should not have done these things. Her faith helped her realize this and is a huge reason she was able to get through this time in her life.

Linda was incarcerated for three years and spent time in a state prison before getting transferred to a lower-level facility. Her experience at the state prison was like “nothing she could have ever expected.” She described it as horrible and incredibly hard to get through, but Linda persevered and was able to stay positive due to her faith. The second facility was easier, and she really took to the mindset of using it as an opportunity to better herself. She said that “if you have the mindset to let the system rehabilitate you, it can work, but if you don’t, then it can make you much worse.” Not only was this a difficult experience for her, but her time away was incredibly hard on her family. Both her children fell into tough times while she was incarcerated, but her daughter took it the hardest, getting into trouble herself and having kids of her own. Knowing her children were struggling made it hard on Linda, but she learned to accept what she had done by taking on the mindset that she was in prison for a reason. This perspective allowed her to successfully grow from her experience and helped immensely when she was released.

Upon her release from prison Linda was picked up by her son and taken to a halfway house. Knowing the struggles that come with being released, it was hard to be hopeful, especially in the environment she was entering, but Linda continued to rely heavily on her faith and beliefs to get her through the incredibly tough time. Luckily, she found Uplift only 2 weeks after being let out of prison. Her parole officer recommended the program to her, and she enrolled soon after. Linda immediately found the hope she was lacking upon her release. She noted that her “kids didn’t understand why I was so happy to find Uplift, but I knew how great it was.” Linda loved the community created by Uplift as it allowed her to begin socializing again. Being able to do something as little as have lunch with people who had been through similar things was an incredible experience that came with no judgement.

In addition to the environment, she found Uplift’s life skills training incredibly useful in keeping a positive mindset. One lesson that still sticks with her is from our Lead Instructor Monique Oakman-Robinson. She would create a theme of the day and write it on the board to make sure that every day had a sense of direction and purpose. When Linda is having a tough time now, she still uses this strategy to make her day meaningful and easier to get through.

Linda began working at Shoprite promptly after graduating in 2019 and started as a cashier. Within two weeks of beginning work, she was promoted to customer service, and has since worked several jobs at ShopRite earning multiple promotions. As of this February, after 2.5 years at Shoprite, Linda received the opportunity to work for PECO as a business analyst, a job she found through her work with Uplift. While she now works full-time at PECO, she still finds time once a week to work with ShopRite and will always remember what they did for her. Now, Linda is extremely happy to be back with her family. She is still striving to achieve her goal of giving her kids the life she did not have, and she is now able to support them to the best of her abilities, both as a mother and grandmother.

To end our conversation, Linda had this to say about Uplift:

“Uplift was genuinely concerned about me and my wellbeing. Everything they promised they did. They bridged me from the halfway house back into a life that I love and appreciate. They helped me get a job, they signed me up for social service, they helped me with transportation during and after the program have end. Uplift follows up on me regularly to make sure I am getting along and have what I need to live independently. They help me financially, emotionally, and spiritually. The lessons and the joyful friendships that I have gained are priceless. The charity that this program has should be widespread. Thank God for Uplift”