From Hardship to Hope is a series of stories about our program graduates told through their eyes. From childhood to now, we will learn about their journeys, and try and understand the impact Uplift has had on their lives. This story is about Denise Johnson, a 2016 workforce graduate who has gone from working as a cashier to a PCA position at Universal Charter School. This is how she got there:

Denise grew up in a housing project and is the oldest of three. She moved from the local public school to Catholic school, because her mother wanted her to have better teachers and a more supportive environment. While going to a much better school helped their education, this change resulted in a challenging dynamic for Denise and her siblings within the neighborhood. Most people in the housing projects attended public school, and now looked at the Johnsons as being too good for them. Denise had this to say about this new situation: “I had to fight all the time and I didn’t know how to fight…my mother didn’t raise me to fight. We had to run home all the time, sometimes we had to run 4 or blocks out of our way just to get home.” There were some others in Denise’s situation, however, most of those people had older brothers and sisters to defend them. As the oldest, Denise had to be that person but did not know how. 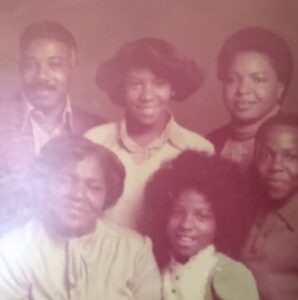 While her neighborhood environment did not support her, her family was extremely nurturing and have been with Denise every step of the way. Both of her parents had jobs to support the family as best they could, but this meant they had to work constantly. Even with this, their financial struggle was still evident. Denise said that “at one point we had to sell our furniture. We made chairs out of pillows and that’s what we had for a year.” Despite this situation, the love and support of her family is what got her through these tough times.

For high school Denise went to Engineering and Science where she was part of the inaugural class. While a good program, she was unable to graduate due to an early expulsion. This happened because of a fight she got into with a group of three girls. One day she was followed home from school by these girls. They started pushing her repeatedly, and when she tried to get away, they continued to follow her. While she did not retaliate then, the next day she brought a friend to her school and went to see what the girls would do when it was not just her. The school had a zero-tolerance policy when it came to violence, and she was dismissed soon after.

After the fight Denise transferred to Southern high school. While smoother than her stint at E&S, she got pregnant at the age of 16 and became a mother while still attending classes. This forced her to be an adult before she had experienced the world, and she missed out on a vital stage of her life. Despite this, she graduated on time and began to attend community college, but she did not graduate. Around the age of 25, Denise started getting depressed. She went through an identity crisis because she was not able to experience her childhood properly. While trying to cope with this, and wanting more than anything to please her family, she began her way down the path of addiction.

Unfortunately, Denise’s battle with drugs led to a journey in and out of the prison system. During this time, Denise struggled with asking herself what SHE needed instead of others and realized that she “never got to know who Denise was.” She was unable to maintain employment, and consistently violated parole. While there was an incredible amount of hardship during this time, she learned how to be grateful and that anything is possible. She never thought she would be in the prison system, so this reality set her up for what came next and allowed her to be grateful for other parts of life. It made her evaluate her decision making and think about how those choices affected others. 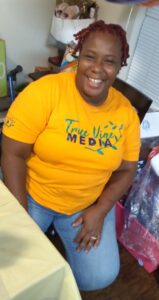 In the meantime, Denise’s children were growing up. Even though her family helped support them in every way, being in and out of prison did not allow her to be there for her children. Reflecting on this Denise said: “I knew I could be a better mother than this, and I wanted to be a better mother, I needed to get a better grasp on my addiction, and it was a fight.” The last time she went to jail, was when her grandson was born. This made her turn things around because she did not want to put her grandkids through what she put her own children through. She never wanted her newborn grandson to see her in prison.

Today Denise has 9 grandchildren, and they always want to be with her. She has taken the family dynamic she had growing up and brought that love and support to her kids and grandkids. Her family was the only thing that kept her together, and they helped her strive. She also had this to say: “In my darkest moments, I knew my mom was always praying for me and someone was always wishing the best for me. My family was determined to help me kick this thing.” From here, Denise wanted to be as involved as possible with her grandchildren, which included volunteering at her granddaughter’s school. Denise was so involved with the school that they were also committed to helping her, and this is where she first heard about Uplift.

While a home care worker at the time, Denise had not been able to hold down or find a consistent job since her time in prison. Her background prevented her from this, not only in finding jobs, but in retaining them. Employers would fire her because of her background even after she got the job and passed their background checks. One instance that sticks with her to this day is in applying for a job she had her heart set on. She got the job; however, she was let go a week into it due to her background and it really hit her hard. She said: “I remember this as if it was today because I sat down and just cried and asked myself ‘when are the doors going to open up, when is everything going to change?’” She thought this cycle was going to repeat forever and ruin every opportunity. Thankfully, she had the love and support of her family to encourage her to keep going. While the cycle lasted for almost 10 years, her life changed when she got Uplift’s information. 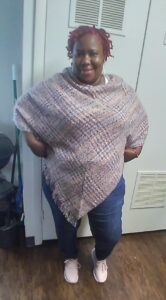 In first exploring the program, Denise knew she had to join. While there were no openings for her at the time, she was so persistent and determined to get into this program that she got an interview. There was no doubt after that she would become part of Uplift. She learned how to be a citizen again, interact with others, and work on herself through the program. “Life has been uplifting for me since the program, and I am so grateful for making me determined and not giving up. I had a lot of moments where I thought it was not going to work for me.” Despite obstacles, Uplift gave her the confidence to overcome anything and made her into a more secure person. She has now opened her eyes to new and greater opportunities.

From there, Denise never looked back. She was with Shoprite for almost 3 years, and then got a job at Universal Institute Charter School where she started as a custodian and food service worker. Everything was going well, until she was diagnosed with stomach cancer that required surgery. After the surgery and treatment, she was not allowed to do the physical work required for her job. Luckily, the school worked with her, and she was able to begin as a Personal Care Attendant for a student with special needs. Denise loves her new role, and she has helped her student make great progress.

Denise is a truly hard worker and has put in an incredible amount of effort into supporting her family. She believes that everything happens for a reason, and she is so happy with where she is today. She has battled addiction, overcome the hurdles facing the formerly incarcerated, and survived cancer. She appreciates how far she has come and continues to live her life to the absolute fullest. Her biggest hope is to one day complete her education and graduate from college.

The last thing we asked Denise was if she had anything left to say about Uplift. She had this: “Barry, Lauren and Monique always showed their love, interest and motivation to us, and what I love and appreciate about them is that they made you feel like you were worth something. That there was more to life, and that you had something to offer. Keep the good work up. Keep inspiring everyone you come in contact with and keep enlightening and touching people. You are going to prosper, and I am so appreciative and grateful of the Uplift program to this day.”